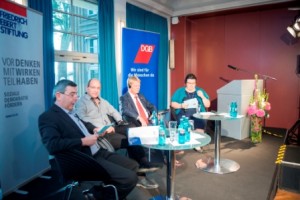 The Friedrich-Ebert-Stiftung (FES) and the DGB – German Trade Union Confederation organized jointly a festive ceremony at the occasion of the 40 years Anniversary of the establishment of special relations between the German and the Israeli Trade Union Organizations.

Upon the invitation of Reiner Hoffman‘s (Head of the DGB) invitation Avi Nissenkorn (Head of the Histadrut) travelled to Germany to celebrate the historic event marking the bilateral relations and to further enhance the cooperation between the two organizations.

The 40 years Partnership between the DGB and Histadrut were celebrated in presence of Hannelore Kraft, Prime Minister of North-Rhine-Westphalia, Avi Nissenkorn, Head of the Histadrut and the Israeli Ambassador in Germany, Yakov Hadas-Handelsman. Hannelore Kraft declared that she considered the cooperation between both Trade Unions an important anchor in the special relations between North-Rhine-Westphalia and Israel.

⇒Program of the festive Ceremony