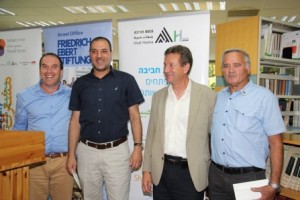 The Friedrich-Ebert-Stiftung’s Human Rights Award 2015 recognizes Ilan Sadeh’s and Hassan Atamna’s long-standing and persistent commitment to peace-building between and peaceful coexistence of Jews and Arabs in Israel.

The Announcement of the Presentation of the FES Human Rights Award 2015 Mr. Hassan Atamna, Head of the Local Council of Kafr Qara, and Mr. Ilan Sadeh, Head of the Menashe Regional Council took place in the presence of Dr. Werner Puschra, Director of FES Israel, and the German Ambassador H.E. Dr. Clemens von Goetze.

The Program of the Event included: 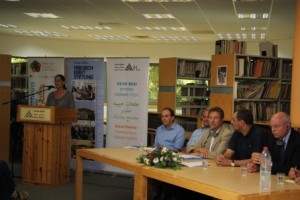 The award ceremony in Germany will take place on 5 November, 2015, at the Friedrich-Ebert-Stiftung in Berlin.

For information about the Reasons for nominating Ilan Sadeh and Hassan Atamna who participated in the Shared Communities Project of Givat Haviva, can be found by clicking here.