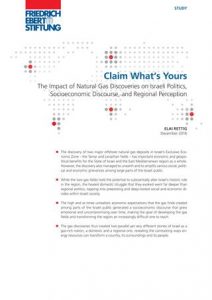 The discovery of two major offshore natural gas deposits in Israel‘s Exclusive Economic Zone – the Tamar and Leviathan fields – has important economic and geopolitical benefits for the State of Israel and the East Mediterranean region as a whole. However, the discovery also managed to unearth and to amplify various social, political and economic grievances among large parts of the Israeli public.

In his study, Elai Rettig analyzes the two different narratives concerning the use of the recent Natural Gas Discoveries.

Elai Rettig is a doctoral candidate at the School of Political Science in the University of Haifa and a doctoral fellow at the Haifa Research Center for Maritime Strategy. He is also a former Visiting Scholar at the Institute for Security and Conflict Studies (ISCS) in the George Washington University. He specializes in Israeli energy policy and energy security.