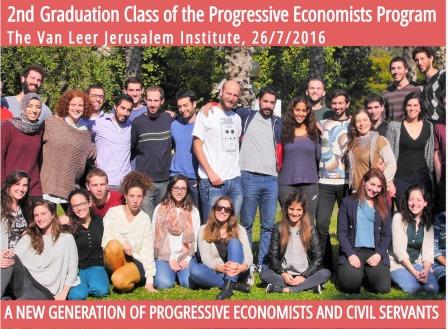 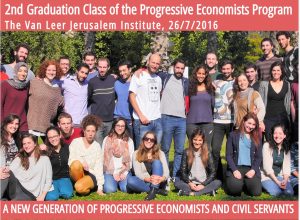 The “Progressive Economists Program“ involving 36 socially-engaged students of Economics, concluded on the 26th of July 2016 after two semesters of weekly meetings, lectures and project works. The Progressive Economists Program ‘s goal is to train a new generation of economists that thinks critically, acts socially and represents social democratic values. Aside of the valuable practical experience, the participants receive the required theoretical knowledge serving them for their future work in the public sector.

During the closing event this year’s graduates displayed posters of the projects they had been working on during their internships in cooperation with research or government agencies. During the Alumni-Event, the program’s second generation of graduates met representatives of various government agencies. In personal conversations they learned about possibilities for economists to work in the public sector. The Bank of Israel, the Prime Minister’s Office, the Ministry of Finance and the National Economic Council were to be found among other represented institutions. Subsequently Orit Farkash Hacohen, former chairperson and general director of the Electricity Authority, provided insights into how the public sector can catalyze social and economic justice.

After that the students presented their own project works, where they had applied economic know-how to problems in the public sector in order to reach greater social justice. The ceremonial event concluded with the conferral of certificates to the graduates.