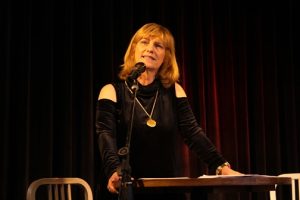 On November 15 FES Israel organized the book launch of Anita Haviv-Horiner’s latest work: “„Grenzen-los? Deutsche in Israel und Israelis in Deutschland”. About 150 participants attended the event at the Talkhouse in Tel Aviv.

The book features the Israeli-German relation of migrants living in-between those two countries. In 16 interviews Haviv-Horiner points out the differences between the social realities of people from both countries with very distinct biographies.

Key note Speaker Prof. Moshe Zimmermann, who also wrote an introduction article for the book, emphasized the meaning of borders in cultural interaction.

Following Anita explained the method and the process of the interviews and presented some excerpts of her book. In the second part of the evening three of the interviewees and two more panellists, one Austrian-Israeli and one Christian-Arab Israeli, who lived for a long time in Germany, discussed their experiences of living in both countries and their personal opinion about borders.

„Grenzen-los? Deutsche in Israel und Israelis in Deutschland” can be ordered online by following this link:

Articles that appeared after the Book Launch: