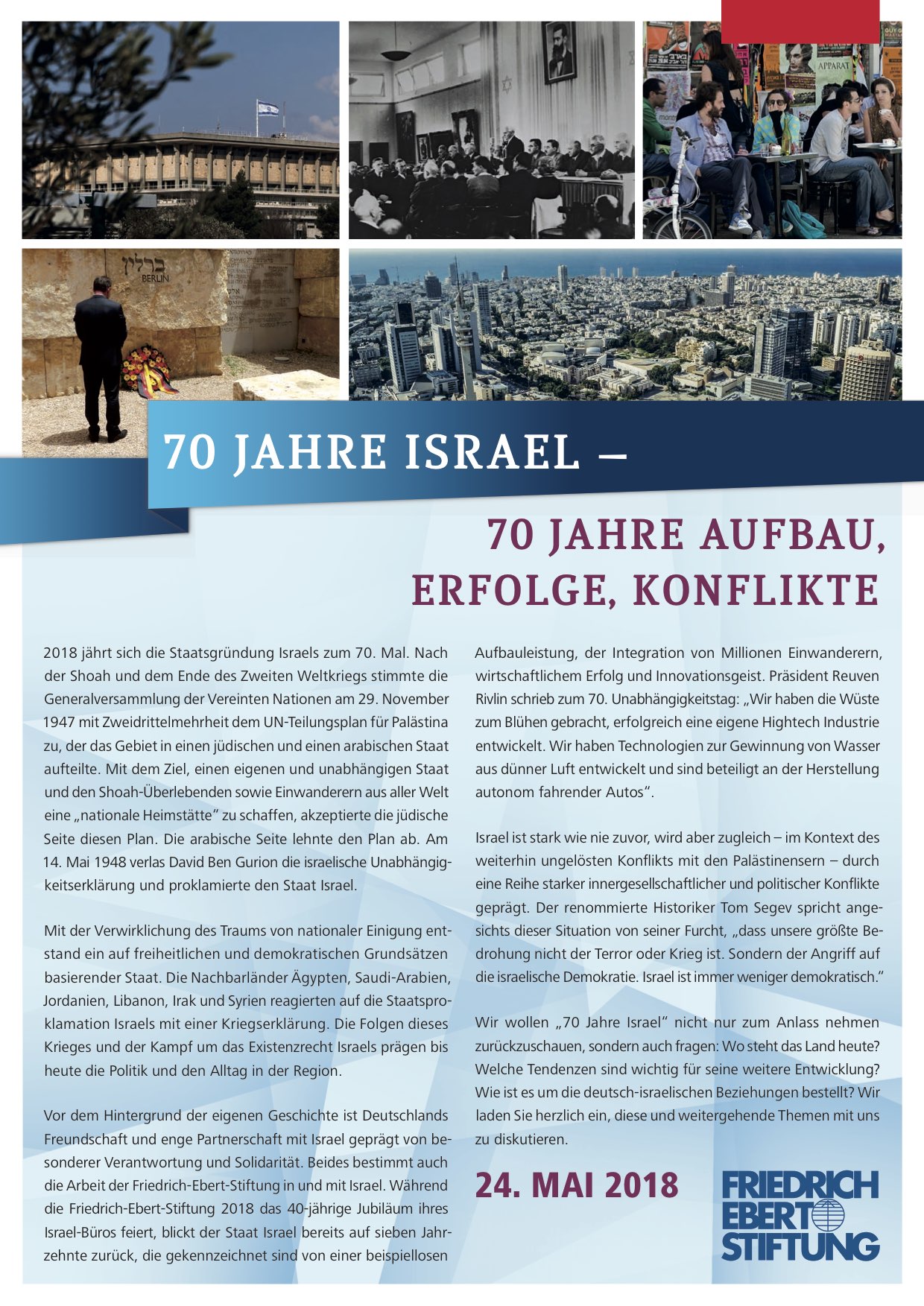 2018 marks the 70th anniversary of the founding of Israel. After the Shoah and the end of the Second World War, the United Nations General Assembly approved by a two-thirds majority on November 29, 1947, the UN Partition Plan for Palestine, which divided the area into a Jewish and an Arab state. The Jewish side accepted this plan with the aim of creating a “national homeland” for its own independent state and Shoah survivors and immigrants from all over the world. The Arab side rejected the plan. On May 14, 1948, David Ben-Gurion read the Israeli Declaration of Independence and proclaimed the State of Israel.

The realization of the dream of national unification resulted in a state based on liberal and democratic principles. Neighboring countries Egypt, Saudi Arabia, Jordan, Lebanon, Iraq and Syria responded to the State of Israel’s proclamation by declaring war against newborn state. The consequences of this war and the struggle for Israel’s right to exist continue to shape politics and everyday life in the region.

Against the background of its own history, Germany’s friendship and close partnership with Israel are characterized by special responsibility and solidarity. Both determine the work of the Friedrich Ebert Foundation in and with Israel. While the Friedrich Ebert Foundation celebrates the 40th anniversary of its Israel office in 2018, the state of Israel can look back on seven decades of unprecedented development, the integration of millions of immigrants, economic success and an innovative spirit. President Reuven Rivlin wrote on the 70th Independence Day: “We have brought the desert to bloom, successfully developed its own high-tech industry. We have developed technologies for extracting water from thin air and are involved in the production of autonomous cars “.


We do not just want to look back on “70 years of Israel”, but also ask: where is the country today? Which tendencies are important for its further development? What about German-Israeli relations? We cordially invite you to discuss these and further topics with us.

The event will be simultaneously translated into Hebrew-German. Please register by e-mail: Yana.Gospodinova@fes.de 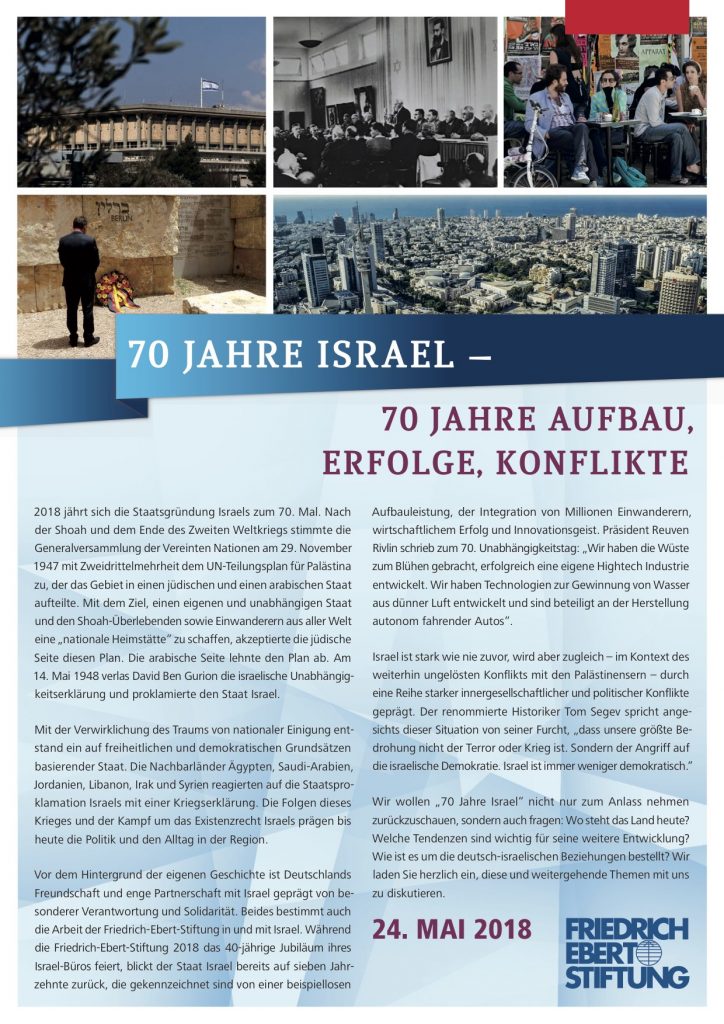 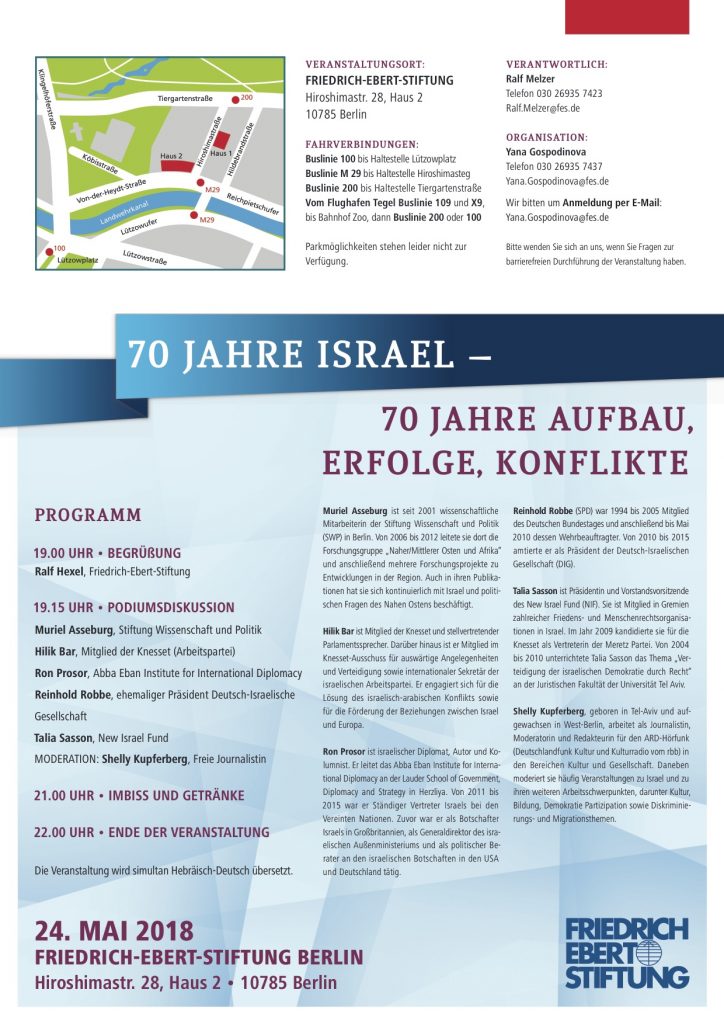