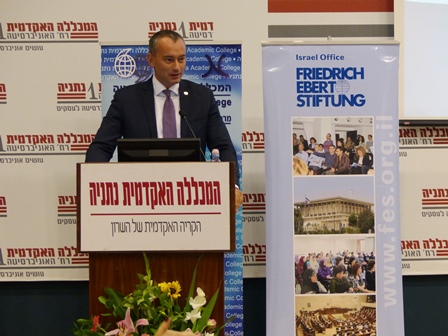 On November 3, 2016 Netanya Academic College and FES Israel presented the conference “Developing a Grand Strategy towards a Peaceful Two State Solution”. The event included three panels with several Israeli and international scholars, politicians and diplomats who discussed the development of a strategy to achieve a peaceful two-state solution for Israel and the Palestinian territories. The contributions covered political, security, economic and religious challenges, as well as the perspective of Israel’s Palestinian Arab minority, and the challenges for civil society work.

The first panel focused on the political process and featured among others the German ambassador to Israel Dr. Clemens von Goetze, MK Yehiel Hilik Bar (Zionist Camp) and MK Yehuda Glick (Likud). Dr. Yair Hirschfeld summarized the causes of past failures, described achievements made and suggested policies to move forward.

During the second panel the security and economic aspects necessary to realize a peace process were examined. Along the three experts who had contributed papers to the publication presented at the conference, Jon Hanssen-Bauer, the Norwegian Ambassador to Israel presented his views on the issue.

The third panel treated the role of the civil society to reach a two-state solution. Among others, the Swedish ambassador to Israel, Carl Magnus Nesser and Dr. Marie-Lyne Smadja, co-founder of Women Wage Peace, and Mr. Kamal Hassan, member of the Board of Mitvim – The Israeli Institute for Regional Foreign Policies, introduced their ideas.

The key note speech was delivered by MK Tzipi Hotovely, the current Deputy Minister of Foreign Affairs. She pointed out the importance of education for the Palestinian youth in order to reach a peaceful agreement.

The EU ambassador to Israel, Lars Faaborg-Andersen recapped the main issues of the conference.

Click here to view the Publication including some of the Articles presented at the Conference!