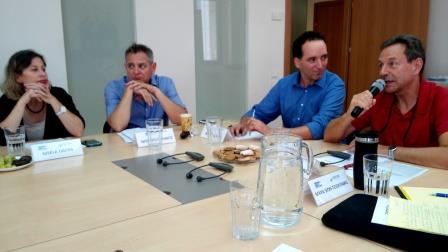 On 27th September 2017 an expert workshop took place at the office of the Friedrich-Ebert-Stiftung (FES) in Herzliya. The workshop’s topic was “Elections in Germany and their influence on Israel, Europe and the Peace Process”. The event was organised by the FES together with Mitvim – The Israeli Institute for Regional Foreign Policies.

Amongst others, Amb. Shimon Stein (former Israeli ambassador to Germany), Nitzan Horowitz (former Member of Knesset), Dr. Gisela Dachs (journalist) and Dr. Nimrod Goren (founder and head of Mitvim) discussed the elections to the German Bundestag and their possible consequences for Israel and the Middle East.