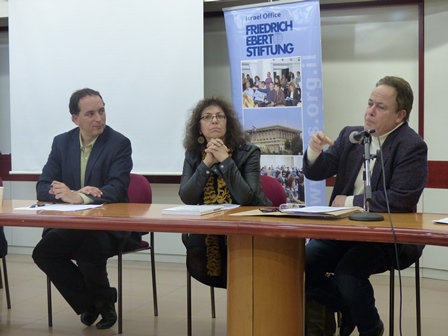 On January 22nd the FES Israel Office in cooperation with the Israeli Association for the Study of European Integration and the Tel Aviv University organized a seminar titled “How has the EU influenced or been influenced by the Arab Awakenings? The experience of the last five years”.

During his Keynote address Dr. Senen Florensa, Director of the IEMED (European Institute of the Mediterranean) and President of EUROMESCO, discussed the outcomes of the Euro-Mediterranean Partnership (Euromed) and gave valuable insights from his time as the Spanish Ambassador to Tunisia. The following Roundtable brought together experts regarding specific countries influenced by the Arab Awakenings. Together with the audience current trends within the respective societies were elaborated.

You can download the Program of the Seminar here!