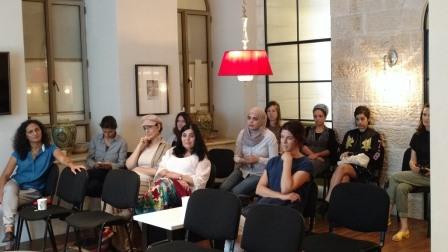 Last month the third year of the project “Greenhouse Women” started in Haifa. The project of the New Fund for Cinema and Television which is realized in cooperation with FES Israel aims at promoting Jewish and Arab women from all segments of Israeli society who want to engage themselves as documentary film directors. In the framework of the approximately eight months of the program the participants are supported in developing documentary projects until the pitching phase, engage in critical discussions of socially relevant issues and build a network of female documentarists. In addition, the project contributes to the enlargement of the number of Israeli female film directors.
Amongst other sessions, a master class with documentary film director Michal Aviad took place in Haifa.