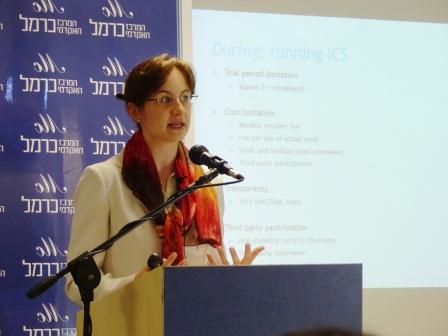 “Developments in International Investment Dispute Settlement – EU and Israeli Perspectives” was the title of a panel discussion which took place in Haifa on Monday, June 20th. The conference was organized by the Law School at Carmel Academic Center, in cooperation with the Israeli Association for the Study of European Integration (IASEI) and the Friedrich-Ebert-Stiftung Israel.

After opening remarks and greetings by Prof. Amos Shapira, Dean of the Law School of the Carmel Academic Center, Dr. Werner Puschra, Director of the FES Israel and Dr. Tal Sadeh, former Co-President of the Israeli Association for the Study of European Integration, the organizer of the conference, Dr. Rachel Frid de Vries, introduced the topic of International Investment Dispute Settlement to the audience.

Subsequently, Dr. Freya Baetens from Leiden University gave a comprehensive overview of recent developments of an EU’s Investment Court System and outlined advantages and disadvantages of such a framework. Prof. Yoram Haftel from Hebrew University presented his research on bilateral investment treaties.  Finally, Dana Dayborg from the Ministry of Justice examined the topic from an Israeli perspective and talked about the influence that the instrument of International Investment Dispute Settlement has on Israel.

Program of the Panel Discussion