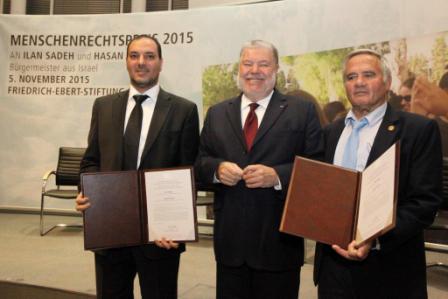 On November 5, the Friedrich-Ebert-Stiftung’s Human Rights Award for the year 2015 was bestowed to Mr. Ilan Sadeh, Head of Menashe Regional Council, and Mr. Hassan Atamna, Head of Kafr Qara Local Council.
The Friedrich-Ebert-Stiftung honors Ilan Sadeh’s and Hassan Atamna’s long-standing and persistent commitment to peace-building between Jews and Arabs in Israel and their participation in the Shared Communities Program of Givat Haviva together with five other mayors in the Wadi Ara region. Their courageous engagement is an important contribution to the building of a shared society in Israel in which all citizens enjoy equal rights and live in peace and mutual respect.

The laudation was held by Reinhold Robbe, Director of DIG e.V.

Read more about the candidates at: http://www.fes.de/themen/menschenrechtspreis/en/mrp2015.php

The Announcement of the Presentation of the FES Human Rights Award 2015 to Hassan Atamna and to Ilan Sadeh took place in the presence of Dr. Werner Puschra, Director of FES Israel, and the German Ambassador H.E. Dr. Clemens von Goetze on October 22 at Givat Haviva.

Press Coverage in the Israeli Press

Press Coverage in the Arab Media