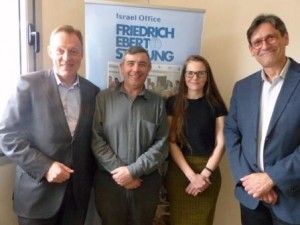 Current domestic political dynamics in Israel, global political challenges, particularly regarding refugee policies in Europe and Israel, strengthening of the contact between the Israeli and German social democracy, as well as of the bilateral political and economic relations – It is these issues that guided the visit of Thomas Oppermann, Leader of the parliamentary group of the Social Democratic Party (SPD), to Israel from March 22nd – 25th 2016.

First of all, the program included political talks in the Knesset with representatives of the sister parties, namely with MK Isaac Herzog, Leader of the Opposition and Leader of the Israeli Labor Party (Avoda), MK Hilik Bar, Secretary General of the Israeli Labor Party (Avoda), and Ilan Baruch, foreign policy adviser to the leader of Meretz, MK Zehava Galon. 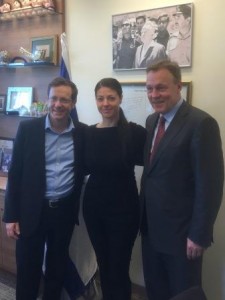 He also discussed the bilateral political, economical, and cultural relations with Grisha Alroi-Arloser, Managing Director of the German-Israeli Chamber of Industry and Commerce and President of the Israeli-German Society, the German Ambassador to Israel, Dr. Clemens von Goetze, as well as the author Nir Baram and the leading publicist Akiva Eldar.

Additionally, with regard to the conflict in Syria, the evolution of Daesh, and the European refugee policy, aspects of current foreign policy challenges arose during Mr. Oppermann’s conversation with Dr. Arad Nir-Halber, Head of the Foreign News Desk at Channel 2, and Maria Jammal, Co-Founder and Director of the non-governmental organisation Humanity Crew.