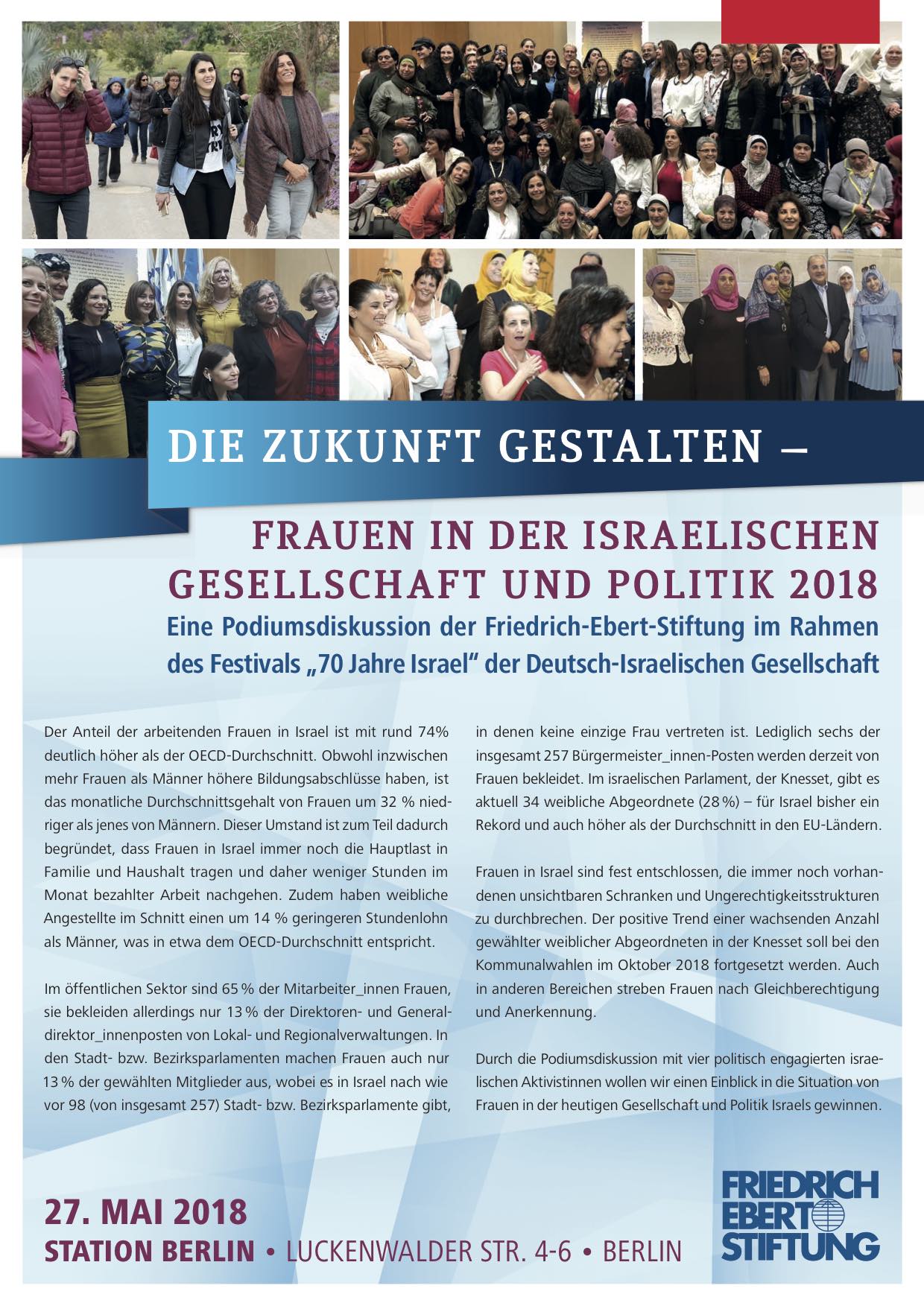 As part of the festival “70 Years of Israel” of the German-Israeli Society, a podium discussion of the Friedrich Ebert Foundation takes place in Berlin, to which we cordially invite you.

The event will be simultaneously translated into Hebrew and German. If you would like to participate, please register by e-mail: yana.gospodinova@fes.de

The proportion of working women in Israel, at around 74%, is significantly higher than the OECD average. Although more women than men now have higher educational qualifications, the average monthly salary of women is 32% lower than that of men. This is partly due to the fact that women in Israel still bear the brunt of their family and household and therefore spend less hours per month on paid work. In addition, female employees on average have a 14% lower hourly wage than men, which is roughly equivalent to the OECD average.

In the public sector, 65% of employees are women, but they occupy only 13% of the director and general director positions of local and regional governments. In the city or district parliaments, women constitute only
13% of the elected members, while there are still 98 (out of a total of 257) city parliaments in Israel, where not a single woman is represented. Only six of the 257 mayor posts are currently held by women. In the Israeli parliament, the Knesset, there are currently 34 female MPs (28%) – for Israel so far a record and also higher than the average in the EU countries.

Women in Israel are determined to break through the invisible barriers and structures of injustice that still exist. The positive trend of a growing number of elected women MPs in the Knesset is expected to continue in local elections in October 2018. In other areas, too, women are seeking equality and recognition.

Through the panel discussion with four politically engaged Israeli activists we want to gain an insight into the situation of women in today’s society and politics of Israel.

Hani Briga is primarily involved in socio-economic issues as well as for gender justice, employee rights and transparency – for example as a campaign manager in the ANU organization. She is also coordinator of the Coalition for Transparency in Local Government and the Women’s Activists’ Forum. She also volunteers as editor of a local paper in Yeruham, which seeks to empower the community by creating local publicity.

Nadia Hamdan Ibrahim has been the district chairperson of the women’s organization Naamat in Central Galilee since 1994 and a member of the Women Wage Peace Movement. She initiates and leads programs and projects promoting the public and political status of women. In addition, she is involved in various organizations whose goal is to strengthen the role of Druze women both within the Druze community and throughout Israeli society.

Talia Volkovitcher is “Israel Operations” director at Jewcer – a crowdfunding platform for social goals. Before that she has worked as senior regional representative of the Jewish Agency for Israel in St. Petersburg. As an active member, she is also responsible for resource development at Women Wage Peace – an Israeli movement committed to a non-violent and compromise-oriented solution to the Israeli-Palestinian conflict.

Michal Zernowitski‘s commitment is to the equal rights of Haredi (ultra-orthodox) women. She is the director of Ir Vaem – a movement of Haredi women committed to improving education, workers’ and women’s rights in the ultra-Orthodox community. She is head of the Haredi section of the Labor Party and is also a board member of the Israel Woman’s Network. In 2014, she was the first ultra-orthodox woman to run for a city council in Israel.

Shelly Kupferberg, born in Tel-Aviv and raised in West Berlin, works as a journalist, moderator and editor for ARD radio (Deutschlandfunk Kultur und Kulturradio vom rbb) in the fields of culture and society. In addition, she frequently hosts events on Israel and its other areas of work, including culture, education, democracy, participation, as well as issues of discrimination and migration. Shelly Kupferberg will moderate the panel discussion. 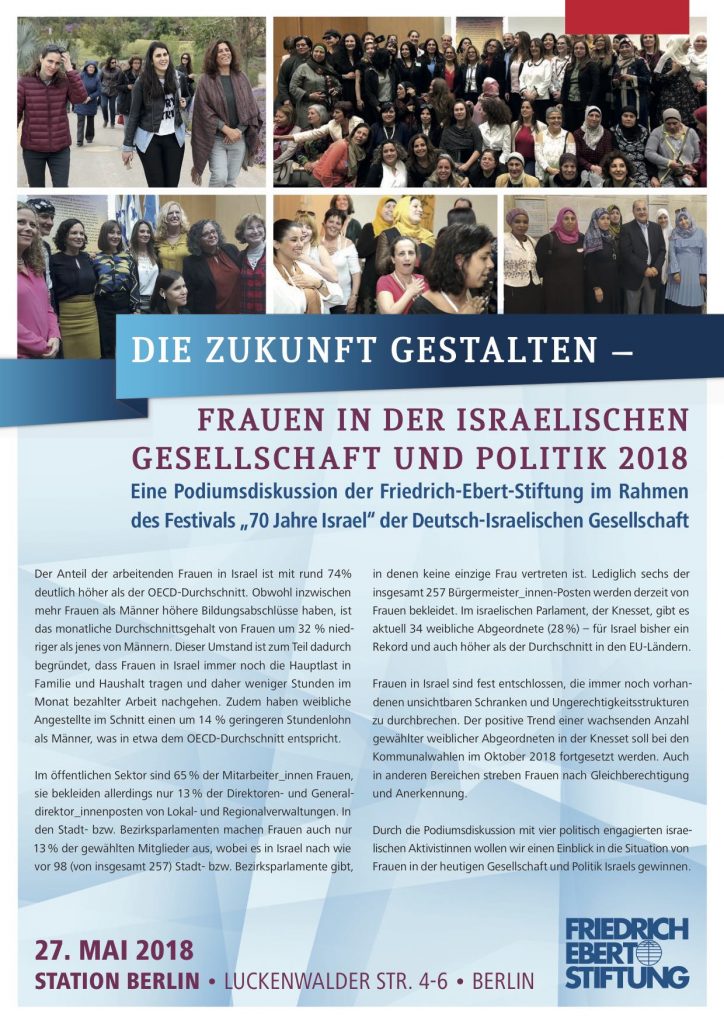 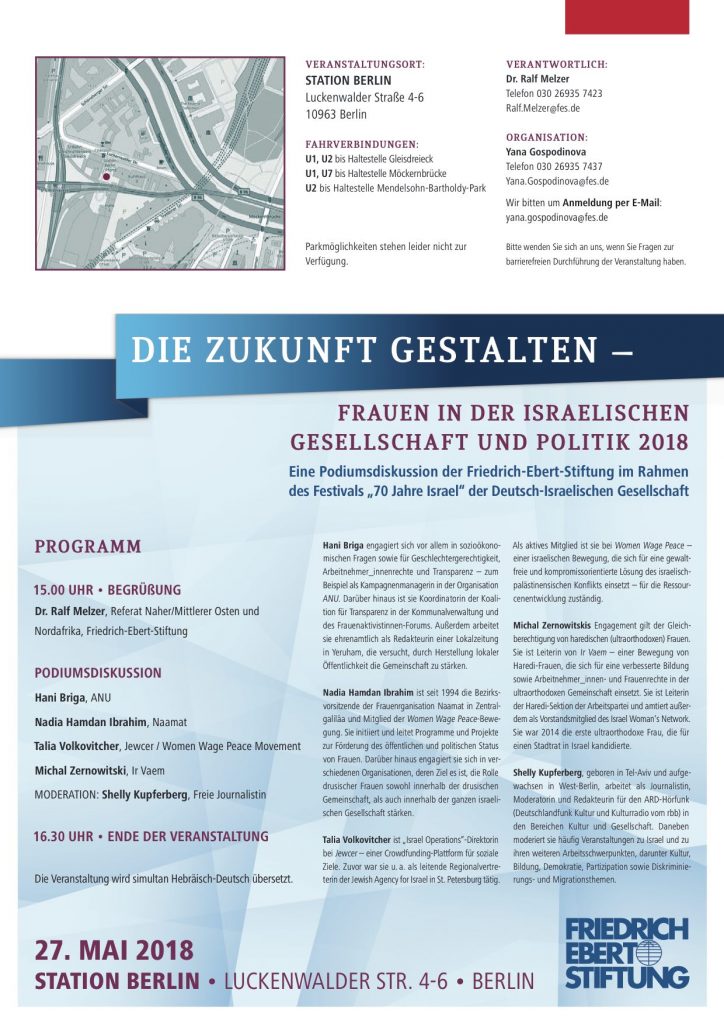