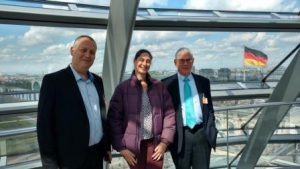 Last week FES Israel organized together with FES Headquarters in Berlin a series of meetings between the Chaiman and the CEO of the Peace and Security Association, Brigadier General (res.) Gadi Zohar and Lt. Colonel (res.) Aviv Feigel with leading German politicians, officials and researchers.

The Peace and Security Association is an organization representing hundreds of security experts, veterans of the IDF, Mossad, Shin Bet and the Israel Police and works to promote a sustainable political solution to the Israeli-Palestinian conflict as a critical component of Israel’s national security and social resilience. 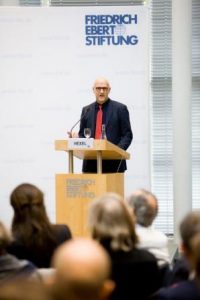 The purpose of the meetings in Germany was to share Mr. Zohar’s and Mr. Feigels views, based on their long standing military experience, with their German counterparts.

Mr. Zohar and Mr. Feigel were greeted by Mr. Kurt Beck, Chairman of Friedrich-Ebert-Stiftung, and Ms. Christiane Kesper, Head of the FES Division for International Cooperation. During their visit to Berlin Mr. Zohar and Mr. Feigel then participated in a round table discussion at the German Institute for International and Security Affairs (SWP), met with senior officials at the Federal Foreign Office and with members of the German Bundestag representing the Social Democratic Party.

In addition, they took part in a public event together with Carmi Gillon, former head of Shin Bet and former Israeli Ambassador to Denmark, Dr. Mary Totry, senior lecturer at Oranim College and Ms. Moriya Kor, Journalist to discuss the transformation Israeli society and the IDF have undergone since the Six-Day-War and perspective for the solution of the Israeli-Palestinian conflict.