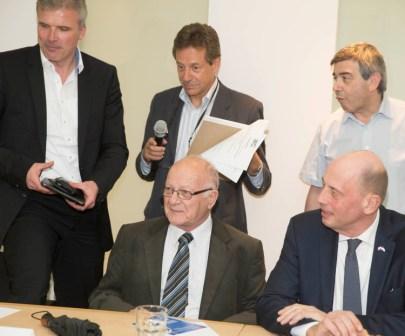 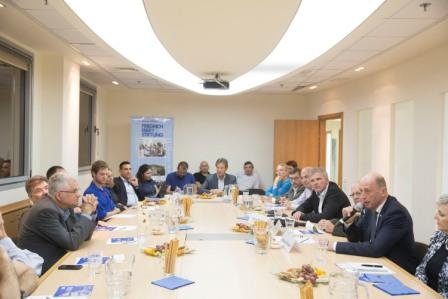 “Economic and labor market policy challenges for Israel” – approaching this issue the Friedrich-Ebert-Stiftung Israel invited to a Roundtable Discussion with Wolfgang Tiefensee, Minister for Economic Affairs, Science and Digital Society in Thuringia on the 27th of October. Tiefensee was joined by a delegation of scientists and politicians from Thuringia, including Prof. Dr. Walter Rosenthal, President of the Friedrich-Schiller-University of Jena, Dr. Claudia Hillinger, Head of the International Office of the University of Jena, as well as Mr. Andreas Bausewein, Mayor of Erfurt.

The Roundtable Discussion was opened with an input of Mr. Micha Harish, former Minister of Industry and Trade and former Secretary General of the Israel Labor Party (Avoda). In his speech Harish emphasized on the one hand the strong Israeli economy, which is based on science and technology but on the other hand he also addressed the 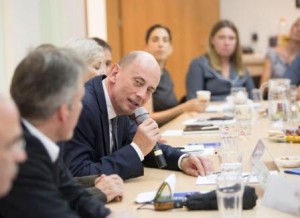 high inequality rate of Israel among the OECD countries. After the German delegation received an overview of the current economic situation of Israel, there was a great interest within the Israeli audience to also gain an insight into the German current affairs. Trade unionists, scientists, journalists and representatives of NGO´s were among the curious audience, which asked elaborated questions concerning the current situation in Thuringia, Germany and the EU. They were especially interested in the refugee issue, the Volkswagen-affair and its influence on the German economy, as well as in chances and achievements of the new leftist government in Thuringia. A light dinner following the discussion provided the opportunity for further exchange between Israelis and Germans in a casual atmosphere.