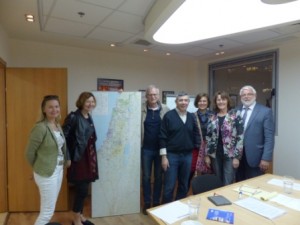 „Is there still any chance for peace between Israelis and Palestinians?” – this question was the most urgent one on the mind of the SPD-Delegation from Bavaria, under the direction of Hans Ulrich Pfaffmann, deputy chairman of the parliamentary group of the SPD. Seven social democratic members of the Bavarian parliament visited the Friedrich-Ebert-Stiftung Israel in our office in Herzliya on Wednesday 18th of November.

Before answering the burning question about peace between Israelis and Palestinians, Micky Drill, Project-Manager of the Friedrich-Ebert-Stiftung Israel and expert for German-Israeli relations, gave an overview about the current political situation in Israel. The relations between the German leftwing and Israel as well as the public perception of these relations were of special interest for the German group. Since the German leftwing is rather perceived as critical towards Israel, it is noteworthy that the German labor movement established relations to Israel already in the late 50s and thus laid foundations for the special relations between Israel and Germany. 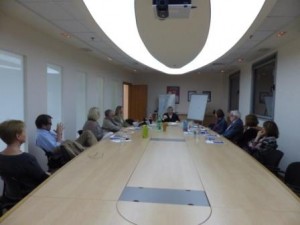 Moreover the German public opinion towards Israel was discussed and the delegation agreed that “Israel” should be a more central topic in the German syllabus. Only thus it can be avoided, that “Israel” becomes an “elite project”. In the end of the talk Micky Drill got back to the initial question about peace in the Mideast conflict and offered a “perspective for peace”. He presented different schemes about the future developments in Israeli-Palestinian relations. Finally the delegation from Bavaria left our office with many new insights and even more questions than before.