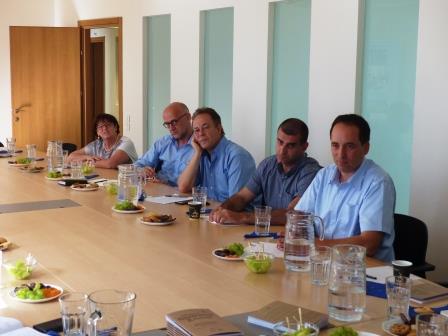 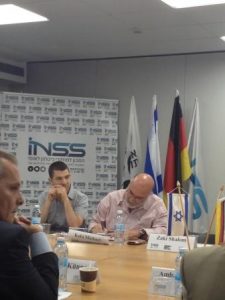 From the 6th of June until the 8th of June 2017, the yearly strategic dialogue between the Institute for National Security Studies (INSS) and the German Institute for International and Security Affairs (SWP) took place at the INSS in Tel Aviv. Among the approximately 35 members were the former Israeli Defense Minister Moshe Ya’alon, the Managing Director of the INSS Udi Dekel, Dr. Muriel Asseburg Senior Fellow at SWP, the Head of the Middle Eastern and North Africa Department at FES Berlin Dr. Ralf Hexel and the Head of FES-Israel Dr. Werner Puschra.

Like in previous strategic dialogues the participants of this year’s internal meeting discussed the current political developments. For instance, the developments in the relations between Israel and Germany were spoken about as well as the current happenings in Iran and Syria, the impact of the Trump administration on Middle Eastern Politics and the ongoing processes in Europe like the Brexit or the rising rightwing populism. At the last day after the dialogue between the INSS and SWP had ended, an additional meeting between SWP and MITVIM – The Israeli Institute for Regional Foreign Policies took place in the office of FES-Israel. Thereby, the participants mainly talked about the Israeli-Palestinian conflict and debated the possibilities of Europe to support the peace finding process. All in all, the FES-Israel can look back at three very constructive days of dialogue with a lively exchange of ideas between the different participants.