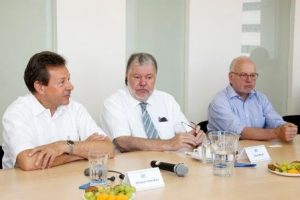 On June 1st 2016, the Chairman of the Friedrich-Ebert-Foundation Kurt Beck and his delegation visited FES Israel. The representatives of the foundation had the opportunity to get in contact with some Israeli partner organizations and to learn more about their joint work with FES Israel.

Dr. Thabet Abu-Rass and Amnon Beeri-Sulitzeanu, Co-Executive Directors of the Abraham Fund Initiatives, reported about their efforts to promote democracy, integration and common political awareness of Jewish and Arab Israelis. The vice President of women’s organization Na’amat Orly Bitty talked about her previous achievements in establishing projects on gender justice. The Social Economic Academy (SEA), which was introduced by Rami Hod, offers amongst other projects a course for progressive 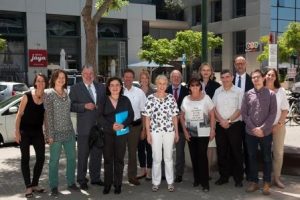 economists in which alternative economic theories are discussed. All speakers emphasized the fact that they see the FES Israel as an important partner with whom they share the same values.

After the presentations the present state and the future of social democracy in Germany and Israel was discussed. Kurt Beck stressed the importance of bringing together different experiences and to find a “common voice of international social democracy”.