Today, at the age of 93, Shimon Peres passed away. All his life, he advocated for a safer, more stable and sustainable Israel while holding different political offices. A peaceful resolution of the Israeli-Palestinian conflict was among his main life goals. For his diplomatic efforts, he was he awarded with the Nobel Prize for Peace in 1994.

Shimon Peres was a politician and a visionary. He served his country as Minister of Foreign Affairs, Minister of Defence, Prime Minister and, until lately, as President. For his key role in the Oslo peace process and his relentless work for reconciliation, he was highly respected internationally – although regarded with suspicion by many of his own compatriots. While furthering Israel’s military armament in the 1950s and 1960s, Peres dreamed of a peaceful region with strong economic ties and deeper cooperation between the states.

Israel and the world lost a man who, until his last days, committed himself to the international understanding between Israelis and Arabs. Shimon Peres was considered a foremost statesman of our time. Sadly, he could not live to see his vision of a peaceful region to become a reality.

Peres also advocated reconciliation between Germany and Israel. The two countries developed a unique friendship, according to a speech he delivered before the German Bundestag in 2010: a friendship, which let the people of both countries made “the joint and decisive decision to look ahead – towards the horizon of optimistic hope”.

Despite leaving the Israeli Labour Party after more than 60 years, he maintained a very special relationship with the German Social Democracy throughout his life and was always a good friend of the Friedrich-Ebert-Stiftung, which enjoyed his support in many different ways and on various occasions. His death is a great loss.

He will be greatly missed and we will cherish his legacy. 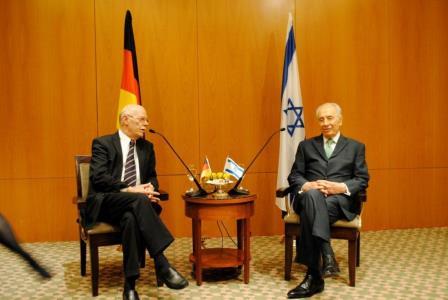